It is a fairish-sized barbet with invariable white underparts, vivid red forehead, and conspicuous yellow-and-white eyebrows. It thrives in savannas, semi-deserts, and gardens, and pairs often occur in dense treed areas and thickets abundant with cavities for nesting. Their call is a unique, wistful “poooop” repeated for about 6-7 times, followed by a muffled, “nyeeeearr” sound.

Read further to know more about the Acacia Pied Barbet.

What is an Acacia Pied Barbet?

Acacia Pied Barbet is a bird species belonging to the Lybibiidae family of the barbets. Its range primarily extends from Angola to Zambia but has recently spread due to the introduction of various alien tree species. They mainly solitary birds, eating fruits, insects, small vertebrates, nectar, and flower petals.

Acacia Pied Barbets are smallish birds, growing from 6.69 to 7.09 inches, and weighing 23 to 39 grams. They have a black-and-white striped head, with a vivid red forehead and yellow-and-white eyebrows. Upperparts are mainly black with yellow streaks. Wings are black with white and yellow markings. Meanwhile, underparts range from white to pale gray to yellow. Eyes are dark brown, the bill is black, while legs and feet are darkish.

African Pied Barbets are nearly endemic to southern Africa, primarily occurring in Angola to Zambia. The bird species generally favors in savannas, but can now be found in fynbos, grassland, urban and agricultural areas, which it did not inhabit recently, due to the introduction of alien tree species. These birds were able to expand its range, and are now occurring regions outside its original area. It can be found in Botswana, Mozambique, Lesotho, Namibia, Swaziland, South Africa, and Zimbabwe.

Interesting Facts You Should Know About the Acacia Pied Barbet

Their egg-laying season usually starts from August to April. These birds nest in holes, which both sexes excavate, seemingly like a woodpecker, in dead or soft wood, down the tree trunk. Common trees it uses as their nest site include Acacia, Euphorbia, Jujube, Willow, and Quiver trees.

The female African Pied Barbet usually lays a clutch in the chamber nests consisting of around 2-4 white eggs, which both sexes will incubate for around 12-18 days. However, they are known to be parasitized by the Lesser Honeyguide. Broods will remain in the nest for about 35 days and be tended to and cared for by both parents.

African Pied Barbets population is not threatened, and the species have actually benefitted from the introduction of alien vegetation that provided them new nesting sites. Their range and number have increased recently. These birds are currently evaluated as Least Concern (LC) under the International Union for Conservation of Nature Red List of Threatened Species. 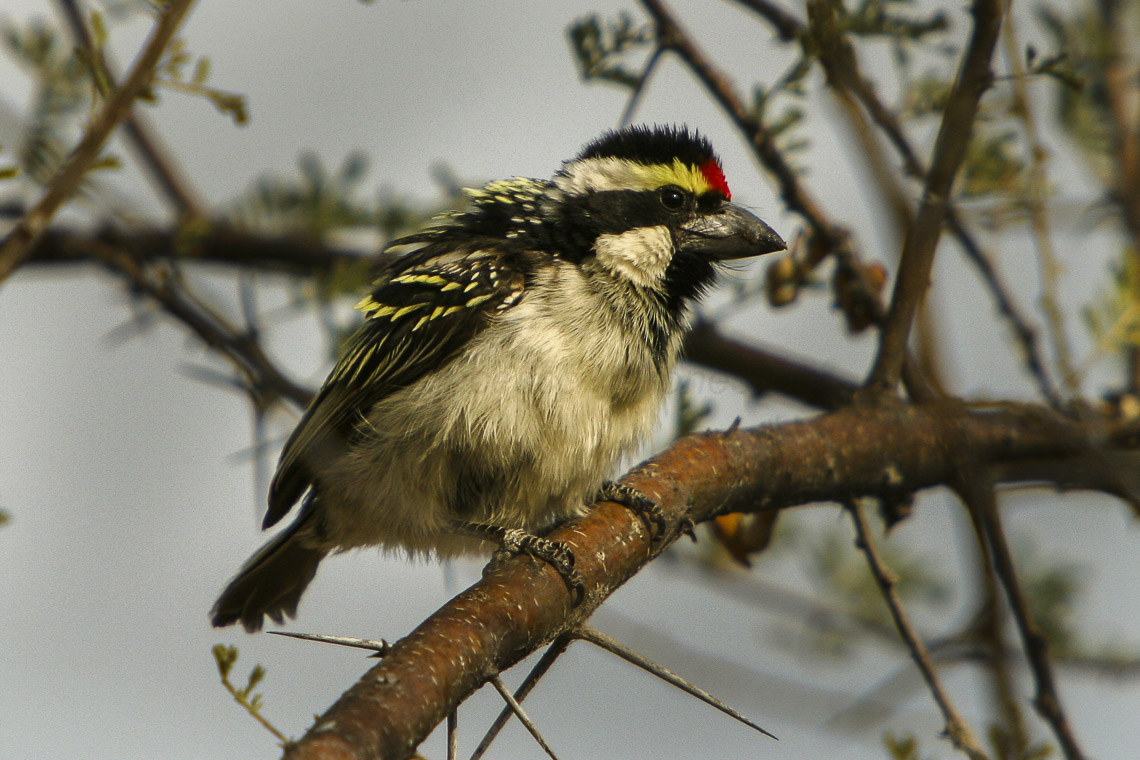