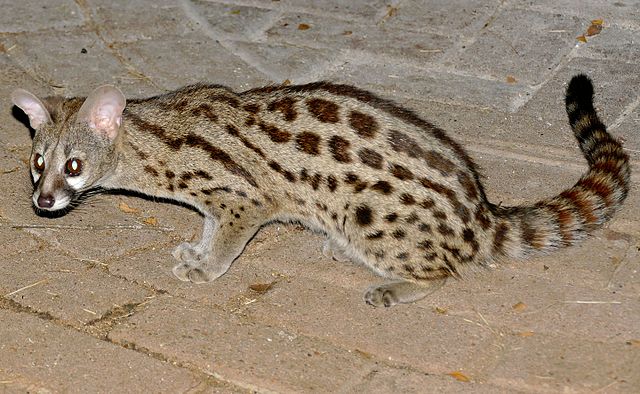 SIZE: Length (including tail) 1 m, mass 1,9 kg.
COLOUR: The upperparts range from pale grey through yellow to light russet. Along the spine is a dark brown stripe and on either side of it rows of large spots that may be reddish or a much darker rusty brown. The long whitish tail has about eight dark rings the same colour as the spots, and a broad black tip. The face is strongly patterned, with a whitish chin and whitish bands running from forehead to inner side of each eye.
MOST LIKE: The Small-Spotted Genet, which is very similar in size. The large-spotted species has shorter, softer hair, its spots usually are bigger, fewer and more elongated and the tip of its tail is black, not white.
HABITAT: Well-watered country, especially the area of rivers. Likes the cover of high grass, reeds, bushes and trees.

It is mainly nocturnal and holes up during the day in a hollow tree or log or in the disused burrow of an aardvark or spring hare. Its normal method of hunting is by stalking the prey and then pouncing, and its diet includes insects and rodents, as well as reptiles, and wild fruit which it often eats in trees.

It seeks the shelter of the highest clumps of foliage where it will rest in the forks of branches, making it a difficult animal to spot. It is frequently seen near rivers, dams and lakes, and has a slinking gait, with its head held low. To get a better look at the surrounding countryside it sometimes sits down in a 'begging' position with its outstretched tail providing balance. When alarmed, it bounds away towards cover. An average of three young are born.

The Large-Spotted Genet (also known as the Rusty-Spotted Genet) easily scales trees when hunting for food or when being pursued.