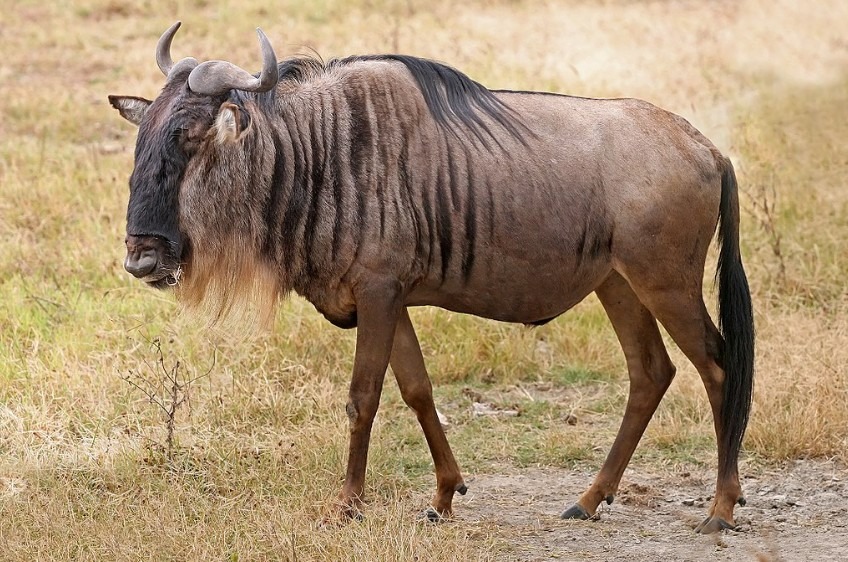 The Blue Wildebeest, also known as the Connochaetes taurinus, Common Wildebeest, Brindled Gnu, and White-bearded Wildebeest, is a large antelope species that is categorized under the Bovidae family. It shares a close taxonomic relationship with the Black Wildebeest. Dubbed as a “wild beast” for its menacing looks, this animal is often described as a reliable source of food for the wild’s main predators such as Lions, African Wild Dogs, Spotted Hyenas, and Cheetahs.

This wildebeest species was first described in 1823 by William John Burchell, an English explorer, traveler, and naturalist. It shares the Connochaetes genus with the Black Wildebeest. The Blue Wildebeest has five subspecies, which are spread across the African continent. C.t. Johnstoni - Also known as the Nyassaland Wildebeest, this subspecies occurs in Mozambique, Tanzania, and now extinct in Malawi,

C.t. cooksoni - Known as the Cookson’s Wildebeest, this subspecies can only be found in Luangwa Valley in Zambia. Rare sightings were also recorded in central Malawi.

Blue Wildebeests are known to hybridize with Black Wildebeests, especially if both species are confined in a single habitat. Since its general population occurs at a wide range and is at a stable rise, the Internation Union for Conservation of Nature (IUCN) Red List tagged this species as Least Concern.

The physical characteristics of a Blue Wildebeest

The Blue Wildebeest’s prominent feature is its long, black tail that measures between 24-39 inches in length. It has broad shoulders, unridged horns, and a broad muzzle. The horns have a parenthetical shape, which are usually thicker in males than females. It has unique vertical stripe marks on the shoulder and back. It has a mane and a beard, which are tan or white in color.

The distribution and habitat of Blue Wildebeests

This mammal is commonly found in southern and eastern Africa. It lives in a wide range of habitats such as dense bushes, open woodland floodplains, Acacia savannahs, short-grass plains, and areas that are neither too arid nor too wet. There are three African populations of Blue Wildebeest that are actively taking part in long-distance migrations, with timings that highly depend on the rainfall and grass growth of an area.

The behavior of a Blue Wildebeest

Blue Wildebeests are constantly grazing all day and night. They like traveling and migrating in large herds. They are territorial and gregarious. Sedentary individuals form herds, while mobile individuals create loose aggregations. Blue Wildebeests only become sedentary when there are rich food and water sources nearby. When sources dwindle, they travel for up to 50 km together to find better pastures. One herd is usually made up of 8 females, their calves, and several territorial bulls who watch out for transient cows.

The breeding season, commonly referred to as rut, happens during the end of the wet season and lasts for 3 weeks. This timeframe is perfect breeding time for Blue Wildebeests because they are in good condition and have been fed and nourished with new grass growth. Conception rate can go as high as 95% during this period.

The rut takes place during a full moon⁠—males have increased testosterone production, become more dominant, and alert. Meanwhile, sexually active females wait for males to copulate with them. They are highly polygamous during the rut that up to several dozen copulations may happen during that period.

The diet of a Blue Wildebeest

As grazers, Blue Wildebeests feed on colonial grasses, leaves of trees, and shrubs. Their broad muzzles are adapted for eating large quantities of grass. When food sources are scarce, they will form herds and travel hundreds of kilometers to look for food.