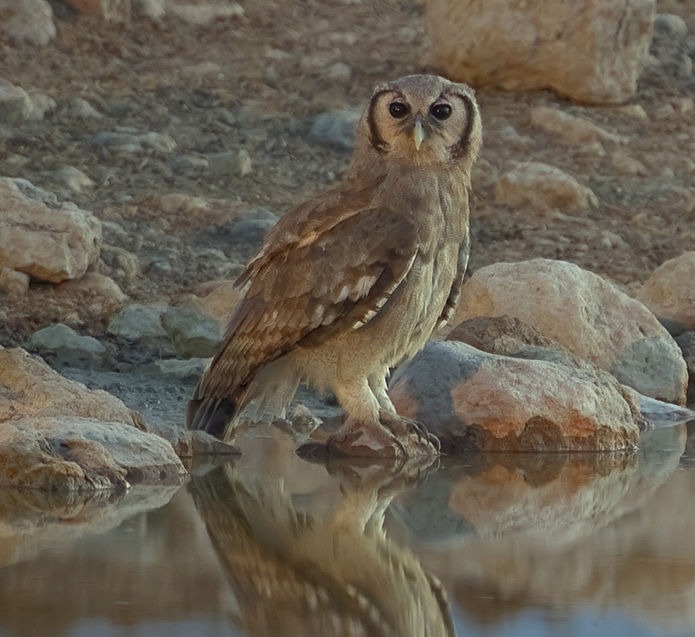 The Giant Eagle Owl, or also known as the Verreaux’s Eagle Owl or the Milky Eagle Owl, is an owl that is endemic to sub-Saharan Africa. It is a member of the Strigidae family, together with Tawny Owl, Forest Owlet, Eastern Screech Owl, and White-faced Owl. Its alternative name (Verreaux’s Eagle Owl) honors the French botanist Jules Verreaux.

This owl is present in sub-Saharan dry and wooded savannahs. Members of its species can be found in countries such as Angola, Kenya, Botswana, Cameroon, Central African Republic, Chad, Ethiopia, Gambia, Ghana, South Africa, Tanzania, Zambia, Zimbabwe, and many more.

This bird species is considered a seldom-encountered species because its population occurs more at low densities. Since their general population is currently thriving and is widely distributed across the African continent, the International Union for Conservation of Nature (IUCN) Red List categorized this species as Least Concern.

As its name suggests, the Giant Eagle Owl is a big eagle-owl. In fact, it is the largest owl in Africa, the world’s fourth heaviest owl, and the fourth longest owl. Its length ranges from 58 to 66 cm. Its average wingspan is 4 ft and 7 in. Its tail length is from 220-273 mm. Female Giant Eagle Owls are usually 35% heavier than males, weighing an average of 1,615-3,115 g.

Its facial disc is off-white in color with black rim. Its eyes are dark brown in color, and its upper lids are pink, making it the only owl in the world that has such a distinct feature. Its bill is pale with a grey base. Its plumage is pale gray to light brown in color. Its back is covered in light brown, and it has white spots on the shoulder. Its ear tufts are smaller than other African Eagle Owls. Its upperparts are greyish brown in color. Its sharp, long claws are dark brown with black tips.

The Giant Eagle Owls are rampant in sub-Saharan Africa. They avoid lush rainforests, that’s why they are rare in western Africa, where rainforests are widespread. They inhabit woodland savannas and thorny vegetation. They also prefer dry regions such as semi-arid and arid zones. Marshes and floodplains are not their typical habitat.

These owls can live at all elevations—from sea level to the snow line, which is around 9,800 ft in elevation. Back in the day, Giant Eagle Owls were rare in the Kalahari Desert, but ever since humans have planted invasive trees such as conifers, acacias, and eucalyptus, these owls can finally inhibit the dry area today.

The Giant Eagle Owl is nocturnal, meaning it’s active at night. It spends the day time roosting or resting in on tree branches that are shaded. It only hunts when the sun is up when there’s an opportunity. According to scientific studies, Giant Eagle Owls rest together. While resting, sometimes these owls groom themselves. This habit is called allopreening.

During hot days, the Giant Eagle Owl flutters its throat, and this habit was said to cool itself. It also enjoys taking a cold bath in a shallow puddle or rain shower to ward off the heat.

Giant Eagle Owls are monogamous. Pairs defend their territory (which can extend to 7,000 hectares) together with a loud cry that can reach up to 5 km. The breeding season peaks during the dry season.

The Giant Eagle Owl is an avian apex predator. It is a top predator who actively hunts for animals, but they have no regular predators. Top predators play a vital role in keeping the ecosystem in balance, for they help control the numbers of prey animals.

Giant Eagle Owls have an interesting way to stay inconspicuous when faced with a potential threat on the ground. It will usually close its eyes and pretend to be dead until the potential threat has left the area.

It also feeds on reptiles, invertebrates, and amphibians such as venomous cobras, large toads, fish, scorpions, and spiders.